Established in 2009, the Transitions Alumni Award recognizes COTC alumni faculty and staff who have made the transition from student to partner in career development, making a difference in the lives of current or future students. It is presented at the annual COTC Alumni Holiday Reception held in December. 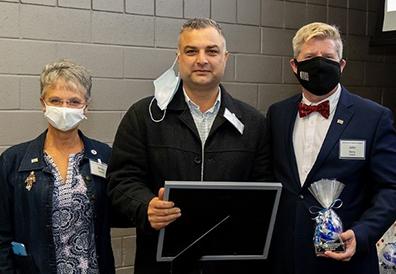 He was nominated by COTC Assistant Professor Thomas Comisford, who once served as Khan’s instructor. Comisford described Khan as “an excellent, hard-working student who consistently excelled in class. His strengths as a student included a natural curiosity about the topics covered in class, determination to solve problems, and how to apply what he’s learning in class outside of class.

“The traits [Khan] displayed as a student are also evident as a full-time faculty member at COTC.”

In addition to his role at the college, Khan serves on the Licking County Chamber of Commerce’s Manufacturer’s Executive Council and C-TEC’s engineering advisory board. He takes great pride in developing good relations with local employers, thereby paving the way for dozens of students to secure internships and jobs. 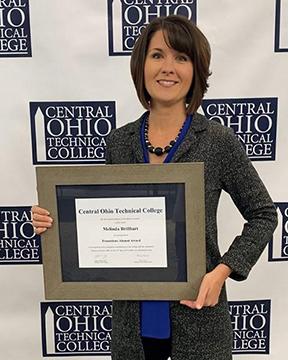 This year’s recipient of the Transitions Alumni Award is Melinda Brillhart, EdD, RDMS, RVT, RDCS, of Johnstown. The award was presented in a virtual holiday reception on December 8, 2020. Brillhart graduated from COTC in 1999 with an AAS in Diagnostic Medical Sonography Technology (DMS). She went on to work as a sonographer at several medical facilities before returning to COTC as an instructor in 2009. She also completed a BBA and MS in Management from Mount Vernon Nazarene University. In 2016 she earned an EdD in Educational Leadership and Management from Capella University.

Brillhart taught part-time at COTC for four semesters before becoming an associate professor and program director of the DMS program in 2011. She received the Excellence in Teaching Award from Phi Theta Kappa honor society in 2011, the John & Suanne Roueche Excellence Award from The League for Innovation in the Community College in 2013, the COTC Teaching Excellence Award for the 2014-15 academic year and the Above and Beyond Faculty Award in 2020.

“After 20 years in the sonography community, I am so thankful that I have the opportunity to give back to my students,” said Brillhart. “Getting an education here changes the trajectory of your life. It really does set you on a path where you not only get a job, but you have a profession. I take pride in my students, and I love being a teacher at COTC. It really has come full circle for me.”

Brillhart was nominated by COTC Dean for Technical Studies Sandra Walker, EJD, who wrote, “She has enhanced the curriculum of the sonography program, including establishing articulation agreements that provide a pathway for students to pursue their bachelor’s degree. Under her leadership, graduates of the program consistently demonstrate a high level of success in credentials achievement.” 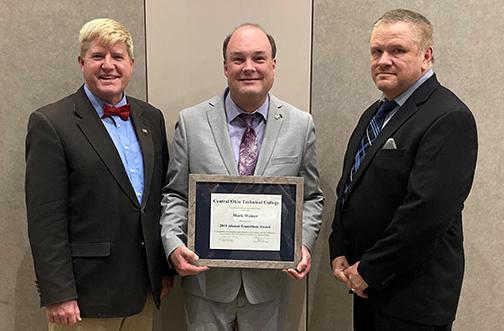 Weiner is a 1992 graduate of COTC’s criminal justice technology program. He went on to earn his Bachelor of Arts in criminal justice. While completing his bachelor’s degree, Weiner participated in volunteer training at the Licking County Prosecutor’s Office. His compassion for those who have been victimized, determination and skills inspired the county to apply for a grant for a victim advocate position with him in mind to fill it. He was hired for the position in 1994 after completing his bachelor’s degree. In 1997, he was promoted to the position of director of victim services serving both the Licking County Prosecutor’s Office and the Licking County Sheriff’s Office. He works with victims involved in felony crime investigations and prosecution from the time the crime is reported to final disposition.

Licking County Prosecutor Bill Hayes said, “If Mark were ever to leave, it would take four to five people to replace him. He’s just that good.” 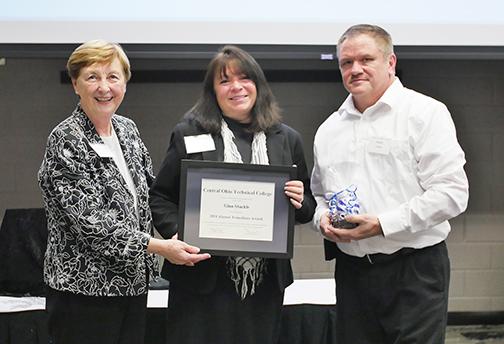 Shackle, a Mount Vernon resident, is a 2011 graduate of COTC and has been a member of the college’s staff for 13 years. She earned an Associate of Applied Business in Office Administration while employed at COTC’s Knox campus. She relocated to the Newark campus in 2012 and was promoted to records management coordinator in 2014. Shackle continued her education earning a bachelor’s degree in human and consumer sciences from Ohio University in 2016.

”I have come to know many of Gina’s coworkers, and I’m very aware of the time she puts in to make a difference with this school and its student population,” said Terry Bertiaux in his nomination. For example, he wrote, “she had stayed at the office late into the night to help a student find some emergency funding so he could turn in a form that had a fee associated with it to get him credit for the last class he needed to graduate.” 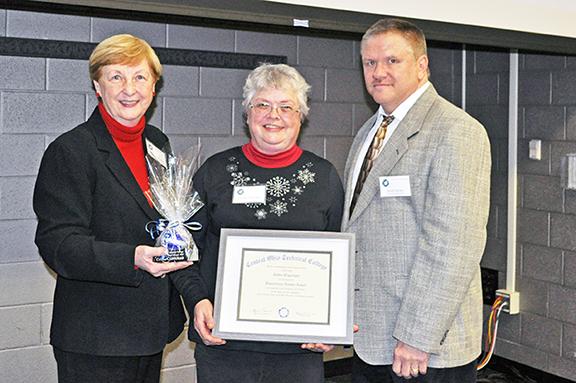 Clippinger graduated from COTC in 1978 with an associate degree in secretarial science. That same year she began working for the college and has served in multiple roles in the Office of Academic Affairs and the Office of Institutional Research ever since.

“For years, her oversight and tracking of the new program development process played a vital role in the growth of the institution,” said COTC President Bonnie L. Coe, Ph.D. “Cathie’s monitoring and maintaining of critical college information has been essential to the college accreditation. Today, we rely heavily on Cathie’s knowledge of the past and strong understanding of the importance of technical education as we build the foundation for the future.”​ 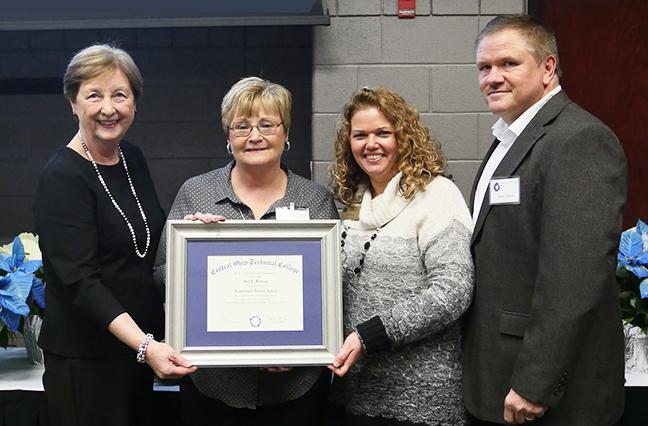 “Jeri helps to advance the college by being an active participant in both department and college committees,” said Dean of Health Sciences Sandy Walker who nominated Whiteus for the award. “She was nominated for Teacher of the Year at COTC both in 2013 and 2016. She was also recognized in Ohio Magazine for excellence in education in 2014.”​ 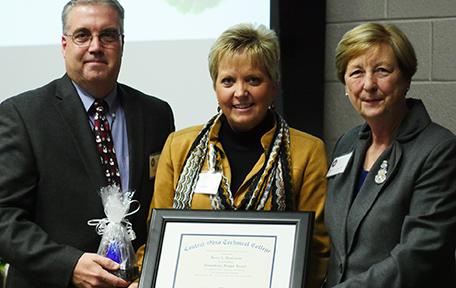 Tomlinson has been the assistant to the president at COTC since 2004 and has worked at the college since 2003. Described as dedicated to customer service, she directs the operations of the office and the daily schedule. “Her commitment to the college is the direct result of her passion for the community and she aggressively seeks opportunities to link the two,” said Teri Holder, COTC executive vice president for extended campuses and Gateway. Raising her family in Heath, Tomlinson has also been a dedicated volunteer in the Heath School district, specifically with the athletic boosters. She is committed to volunteerism with her church, where she is an elder and trustee, as well as with the Salvation Army.

Tomlinson received an Associate of Applied Business in Business Management Technology from COTC in 2012. 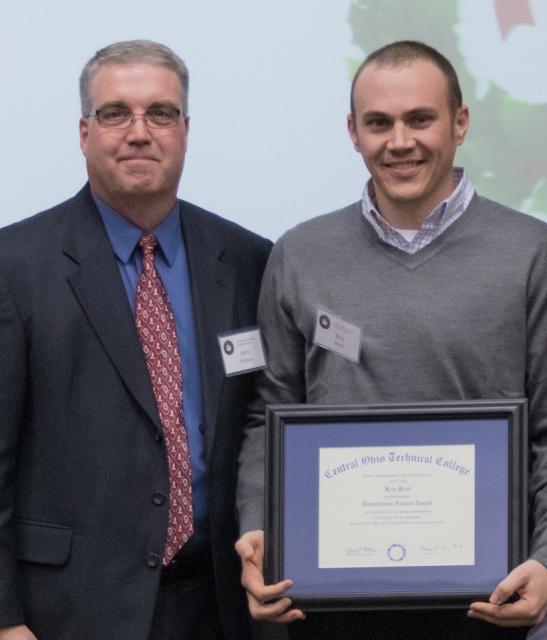 Read coaches swimming at Newark High School, where he has served in that capacity since 2012. He donates his time at the Second Chance Dog Shelter in Johnstown, volunteering as the non-profit’s webmaster. Read began his career in public service as the web applications developer for Licking County Government and assisted that entity in the creation of a website to improve their online presence for Licking County residents.

Whitney Wolfe has been an adjunct faculty member in the COTC radiology program since 2009. She has been an employee at Licking Memorial Health Systems since 2006, where she has worked as a radiographer since 2008. She received the Technologist of the Year award from COTC students in 2009.

Wolfe was nominated for the award by Ken Ollish, Associate Professor in Radiologic Technology at COTC. “She is a very strong advocate for alumni and helps in recruiting future COTC students as they complete the required observation hours as part of the admission critique,” said Ollish.