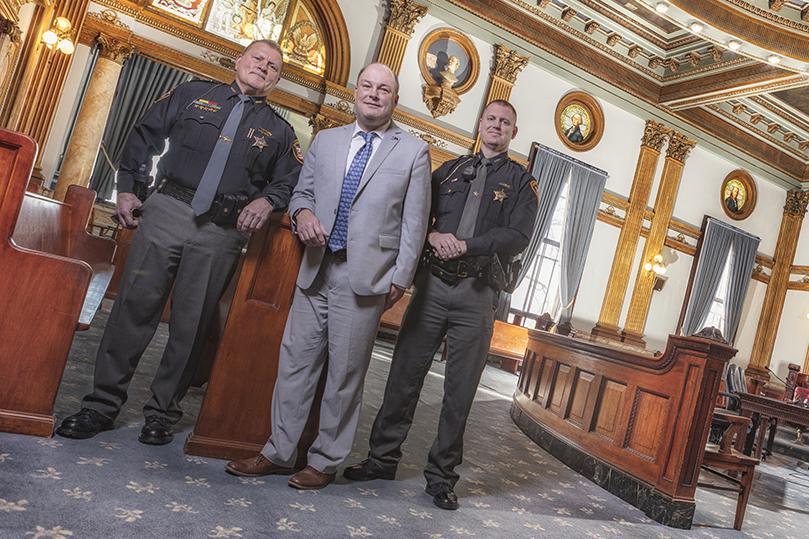 On May 12, 2017, as the nation’s eyes were drawn to the tragic scene of a shooting at Pine Kirk Care Center in Kirkersville, Ohio, three Central Ohio Technical College alumni played instrumental roles in helping to contain the situation and navigate its aftermath.

On that morning, Licking County Sheriff’s Office Deputy Nick Shuster was the first on the scene following the shooting of Kirkersville police chief Steven Eric DiSario. Just six months out of COTC’s police academy, Shuster had been a half hour from ending his shift when his radio relayed a report of a man with a gun at the facility a few miles away.

He responded immediately, arriving in time to move DiSario to the safety of his cruiser to begin performing CPR until medics could safely respond. DiSario’s wounds ended up being fatal; shooter Thomas Hartless also took the lives of nurse Marlina Medrano and nurse’s aide Cindy Krantz before turning the gun on himself.

As the events of the day unfolded, Licking County Sheriff Randy Thorp took charge of the situation, addressing the media and overseeing the details of the investigation. After 34 years with the Licking County Sheriff’s Office, including 13 as sheriff, Thorp was no stranger to crisis management.

Meanwhile, Director of Victim Services Mark Weiner worked behind the scenes to help those affected by the trauma of the event. In the days, weeks and months that followed, he would counsel and support law enforcement officers who were involved in the shooting as well as family members of the victims.

All of these men used the background they established at COTC to serve and give back to their communities. For Shuster’s selfless efforts to save DiSario’s life, Thorp awarded him a prestigious Gold Star, which he wears in honor of DiSario. Shuster has returned to his alma mater to speak to students about his experience in law enforcement to help prepare them for their chosen career field.

Thorp has served with the Licking County Sheriff’s Office since 1983. As a Lieutenant in the Detective Division, he organized and served as the commander and administrator of the highly successful Central Ohio Drug Task Force, a multicounty drug investigation unit. His past accolades include the Sheriff’s Medal of Honor, awarded by the Buckeye State Sheriff’s Association and the Governor of Ohio; the Fraternal Order of Police Medal of Valor; Police Officer of the Year; and the COTC Outstanding Alumni Award, among others.

In 2019, Weiner received the National Crime Victim Service Award for his work in helping victims across the community to navigate grief and trauma. He was also recognized with the COTC Transitions Alumni Award.