The Outstanding Alumni Award recognizes Central Ohio Technical College alumni who have demonstrated personal and professional achievement that brings honor and distinction to the college as well as individual attainment and contributions for the betterment of the community. ​The award is presented at the annual COTC Alumni Holiday Reception held in December. 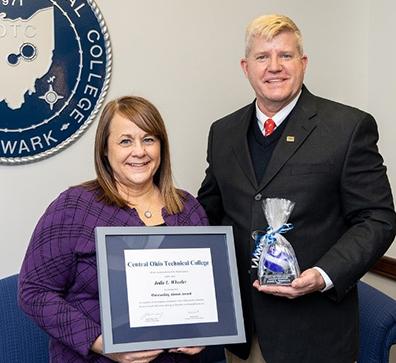 The 2021 Outstanding Alumni Award recipient is Jodie Wheeler, a 1983 computer programing graduate. Wheeler continued her education to earn a bachelor’s degree in accounting at The Ohio State University. Wheeler is treasurer and technology manager at the Newark-based accounting firm Wilson, Shannon & Snow with 35 years of experience in public accounting.

In addition, Wheeler is a board member for The Woodlands Serving Central Ohio; treasurer for the Newark Sport and Event Commission; and a member of the COTC Alumni Council, COTC accounting advisory committee and Newark Area Zonta Club. 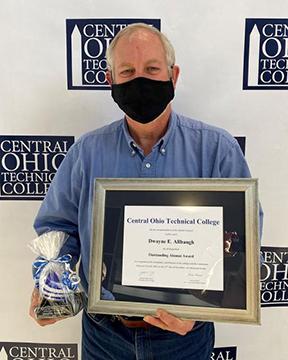 Dwayne Allbaugh, of Nashport, is COTC’s Outstanding Alumni Award recipient for 2020. The award was presented in a virtual holiday reception on December 8, 2020. Allbaugh graduated from COTC in 1982 with an associate degree in electrical engineering technology. Now in his second stint at The Boeing Company, he is a senior engineer and one of the most sought after subject matter experts in the Boeing Guidance Repair Center.

“Dwayne’s technical career, education and degrees alone are not the essence that makes him special, but rather his ability to lead, inspire and mentor the less experienced engineers across our teams,” wrote his colleagues John Urban, Chris Rouillard and Julie Dowdell in their nomination letter. “Dwayne can often be found reaching out to younger engineers and providing them with advice and mentorship that will undoubtedly serve them well throughout their careers. Dwayne is the ultimate team player who derives satisfaction when people around him succeed.”

Allbaugh’s career began at the Newark Air Force Base and has included stops at Good Samaritan Medical Center, the state of Ohio and CeyCal Inc. From product review and test equipment engineer to computer specialist and network system consulting, he has held many roles in both engineering and information technology. Allbaugh continued his education at Franklin University, earning a BS in Computer Science in 2006.

“I’m honored and privileged to receive this award,” said Allbaugh. “My education at COTC was a good foundation to launch into my bachelor’s degree and helped me be successful in my career over 40 years.” 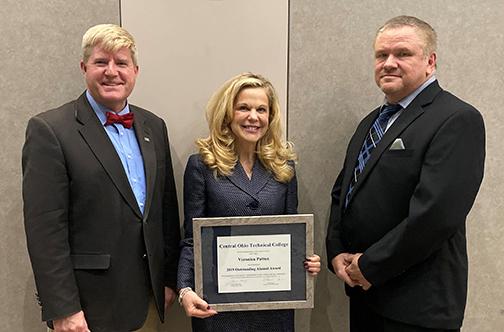 Patton earned an Associate of Applied Science in business in 1984 from COTC. She went on to earn her Bachelor of Arts in business administration from Mount Vernon Nazarene College. Patton joined Licking Memorial Hospital in 1981 and has worked in Licking Memorial Health Systems (LMHS) administration since 1984. Throughout her 38 years at LMHS, she has received several promotions that have led her to where she is today as vice president of development and public relations.

“My degree from COTC was the springboard for my career at LMHS. After graduating from here, I was well prepared to accept a position as the president’s assistant, and I was also well prepare to go on to complete my bachelor’s degree,” said Patton at the reception. 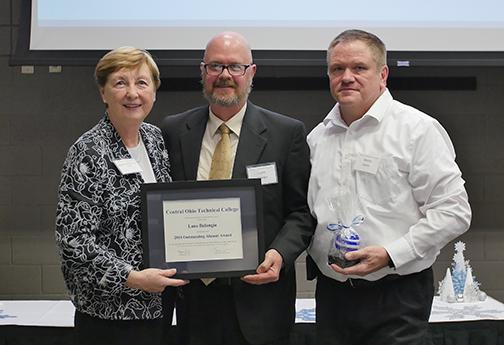 Belangia earned an Associate of Applied Science in Physical Therapist Assistant Technology at COTC in 1997 to begin a successful career in health care. After graduating from COTC, he completed a bachelor’s degree in business administration. For the past five years, Belangia has worked in the Knox County Health Department and is currently the CEO of the Knox County Health Center. Belangia recently joined the COTC Knox campus advisory board, serves on the Knox County Older Adult Task Force and the Station Break Board of Directors, and is a member of the Rotary Club of Mount Vernon.

”Lane’s professional success not only demonstrates the importance of the COTC educational programming but is also a tribute to what COTC graduates can achieve,” wrote Knox County Health Commissioner Julie Miller in her nomination of Belangia. “Lane is also very community oriented and is as generous with service to the community as his time will allow. I value his insight, admire his work ethic and I trust him to lead his program into the future.” 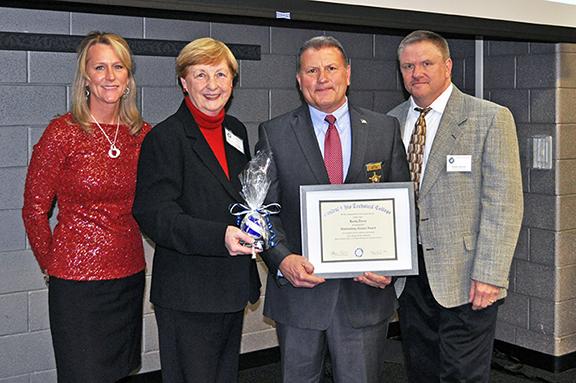 Thorp began his career in law enforcement in 1983 as a deputy. He rose through the ranks to chief deputy in 1997 and graduated from COTC in 2000 with an associate degree in criminal justice. He went on to complete a bachelor’s degree in police administration from Mountain State University. Thorp was elected as sheriff of Licking County in 2004 and has retained his position through multiple elections. He served on the COTC Alumni Council from Jan. 1, 2008, to Jan. 1, 2011.

As sheriff, Thorp has implemented several programs to assist Licking County citizens: Project Lifesaver, Citizen’s Academy, Sexual Predator Awareness and the S.T.O.P.P.E.D. program. His many commendations include: Sheriff’s Medal of Honor awarded by the Buckeye State Sheriff’s Association and the Governor of Ohio, the Fraternal Order of Police Medal of Valor and Police Officer of the Year for which he was recognized by the Ohio House of Representatives and the Ohio Senate.​​ 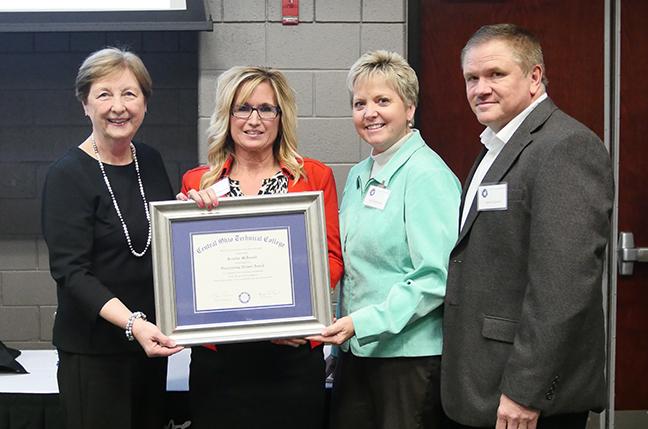 McDonald graduated from COTC in 1990. She served as marketing director for the Licking County Convention and Visitor’s Bureau from 1991 to 2004. In 2004 she became vice president at the Licking County Chamber of Commerce and served in that role until October, 2016 when she was named president and CEO. McDonald was also one of the founding members of the COTC Alumni Council.​

“On several occasions, Jennifer has served as an advocate for the college, providing comments as an alumni during a recent COTC commencement and also congratulating the college on our 45th anniversary through a video clip,” said COTC Assistant to the President Jan Tomlinson who nominated McDonald for the award. “It is an honor to nominate Jennifer McDonald for the COTC Outstanding Alumni Award, and I look forward to our continued work with the Licking County Chamber under Jennifer’s leadership.” 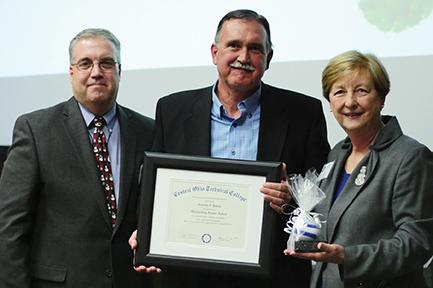 ​Young has been the chief executive officer and president of Licking/Knox Goodwill Industries, Inc. since 2011. Prior to this position he was the assistant executive director and has been employed by the company for over seven years. At Goodwill, Young is accountable for a multi-million dollar budget, seven vice presidents and a staff of over 350 individuals. Previously, he worked in the real estate business where he received many sales and recognition awards including Realtor-Salesperson of the Year from the Licking County Board of Realtors in 1990. His leadership accomplishments are numerous. “He truly has had an impact in central Ohio and especially Licking County,” said Judge Michael Higgins, who nominated Young.

Young received his Associate of Applied Business in Business Management Technology from COTC in 1990.​ 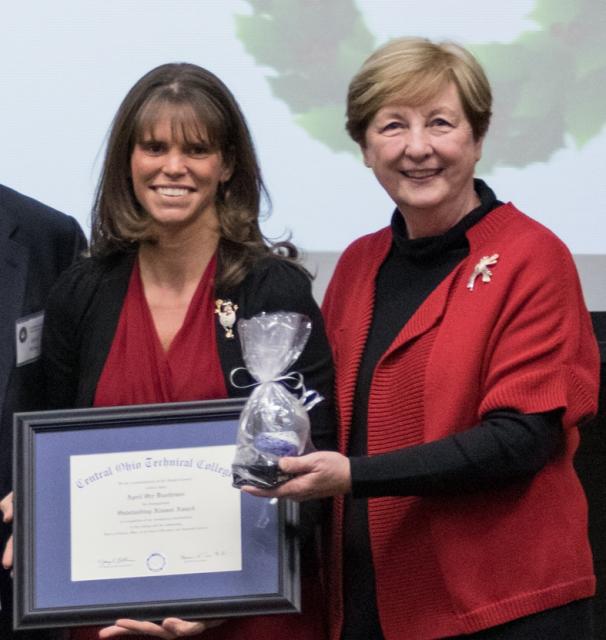 Outstanding Alumni Award recipient April Orr Dusthimer graduated from Central Ohio Technical College in 1999 with an associate’s degree in accounting as the youngest graduate ever just after her 19th birthday. She concluded her studies with a 4.0 GPA. After graduating from COTC, April began her career at Park National Bank and continued her education, earning a bachelor’s degree in business management from Otterbein University and a master’s degree in financial economics from Ohio University. Dusthimer was promoted to vice president in the Park National Bank accounting department’s treasury unit in 2012.

Dusthimer participates in numerous community events as Parky, the Park National Bank’s mascot including parades, school events, the Hartford Fair, 5K/10K events and Trick or Treat on the Square. Beyond playing Parky, April is involved in various other community activities, such as Teach Kids to Save Day, and Big Brothers and Big Sisters Christmas Kids. April has served on the Accounting Technology Advisory Committee at COTC, and has taught as an adjunct instructor. 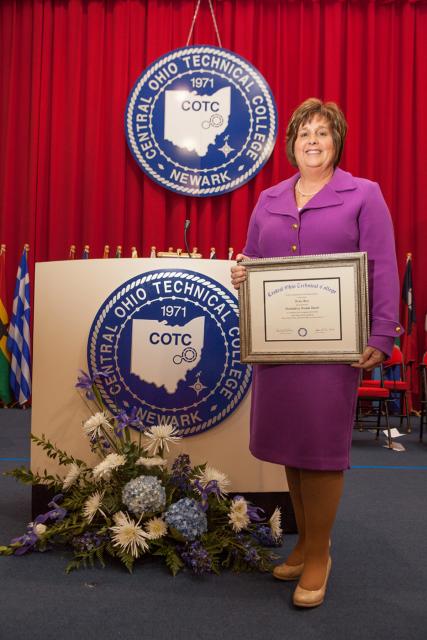 Vickie Sant is the President of First-Knox National Bank, a 37 year  employee and first female president in the bank’s history. She began her career as a teller and has served in a variety of positions at the company since 1976. During her tenure, she was named Employee of the Year in 1986. She has also been named the Knox County Business Woman of the Year in 2010.

Sant received an associate’s degree in accounting from COTC and serves the college as a member of the Knox campus advisory board. She received her bachelor’s degree in business administration from Mount Vernon Nazarene College. Sant is also a graduate of various banking and industry schools since 1973. Her community involvement includes membership in the Mount Vernon Rotary Club, Knox County Chamber of Commerce Board, Hospice Board and City of Mount Vernon Audit Committee among other volunteer organizations.