​​​​The John C. “Jay” Barker Alumni Community Service Award was created in 2013 by the COTC Alumni Council and is presented annually at the July 3rd Independence Day concert and fireworks to recognize COTC alumni who have made a significant impact by their service to the betterment of our community.​ ​The inaugural award was presented posthumously in July 2014 to John C. “Jay” Barker and named in his honor. 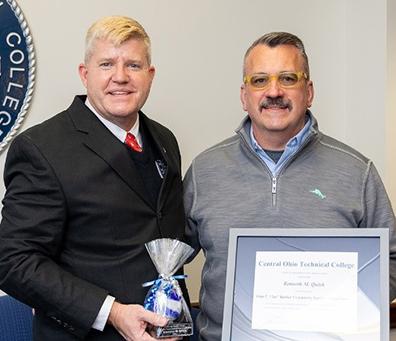 When Ken Quick graduated from COTC in 2013 he received the Outstanding Associate Degree Nursing Student Award. Now he is the recipient of the Barker Community Service Alumni Award. Quick is a staff nurse in Licking Memorial Hospital’s Intensive Care Unit and serves a voluntary role as the director of the Licking County Community Health Clinic. The clinic provides healthcare for the uninsured and underinsured residents of Licking County.

Quick was recognized with the Licking Memorial Hospital Patient Experience Award for going above and beyond the call of duty after helping a patient who did not have air conditioning in his home secure a proper cooling system. Quick also serves on the Ohio Charitable Health Network Legislative Committee and is the Knox-Licking District Delegate to the Ohio Nurses Association. He is an active member of the COTC Alumni Council. 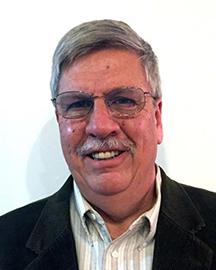 Gary Schworm, of Howard, is this year’s recipient of the Alumni Community Service Award that was presented in a virtual holiday reception on December 8, 2020. “I started at COTC when I was 32 years old. It took me 23 years to finish my manufacturing engineering associate degree, which was a springboard for me to go on and get my bachelor’s degree. You’re never too old to learn,” he said. “At COTC I was able to acquire skills in a lot of different areas…Those newly acquired skills opened a lot of doors for me both in my employment and volunteerism.”

Schworm is retired from the Owens-Corning Technical Center. While working there, he received an AAS in Manufacturing Engineering Technology in 2006 and added a BBA in Management in 2010 from Mount Vernon Nazarene University. Hub Reed submitted the nomination in which he detailed Schworm’s community service that includes volunteering with Habitat for Humanity in Michigan, California and Kentucky as well as Ocho Rios, Jamaica; assisting flood victims in Findlay, Ohio, and Midland, Michigan; becoming a certified pole vault coach and restoring track hurdles for his local school district; and making repairs to the plumbing system in his granddaughters’ school athletic facility.

Reed added, “In addition to all the above, he still finds time to help neighbors like myself who are not very competent in the areas of computers, plumbing, electrical and carpentry.”

Most notable, however, is Schworm’s performance as chair for an operating levy campaign and a bond issue campaign for East Knox Local Schools. Stephen Larcomb, superintendent of East Knox Local Schools, wrote that the district had financial difficulties from 2008-2016, including nine failed operating levies. He asked Schworm to chair the levy campaign committee in 2016; the levy passed on the first attempt under Schworm’s leadership. Three years later, a school bond issue for building construction and renovation was needed by the district. Larcomb once again turned to Schworm.

“Many community members opined that it would never pass. Gary, leading by example as he always does, worked throughout good and fairly ugly weather to pass out campaign materials and talk about the great things happening in our district,” said Larcomb. “The result was bond levy passage on the first attempt by 53-47%, which is a virtual landslide for our school district. Gary is now 2-0 as levy chair.” 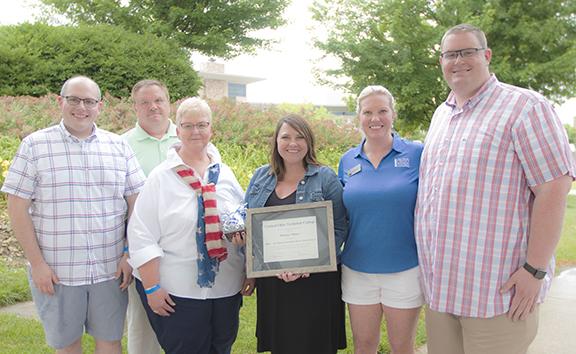 Brittany Misner not only started the Young Leaders of Licking County, she also epitomizes the phrase. Before she turned 30 years old, Misner rose to the rank of vice president at the Licking County Chamber of Commerce. A lifelong resident of Hebron, she not only serves Licking County in her career but also through volunteerism. On July 3, she was presented the John C. “Jay” Barker Community Service Award by the Central Ohio Technical College (COTC) Alumni Council.

”Brittany is a person who is always giving back to others and the community,” wrote Nathan Arnold, who cofounded Young Leaders of Licking County with Misner. “She has committed herself to be a steward of fellowship, making positive changes and philanthropic endeavors within Licking County.”

Misner graduated from COTC in 2012 with an associate degree in business management technology. She was hired as the membership and affiliate director of the Licking County Chamber of Commerce in 2016 and named the vice president on August 1, 2018. According to Chamber President Jennifer McDonald, since Misner’s hiring in 2016, the Chamber saw a 26 percent increase in membership. Misner not only facilitated the development of the affiliate program Young Leaders of Licking County, she introduced new programming such as the annual Safety & HR Expo, Chamber 101 and the Women’s Leadership Conference.

“To receive recognition for something I truly love to do is an honor,” said Misner. “I have been very blessed to have a lot of opportunities thrown my way, and every time they come my way I have worked hard, dug my heels in and made the best of them.” 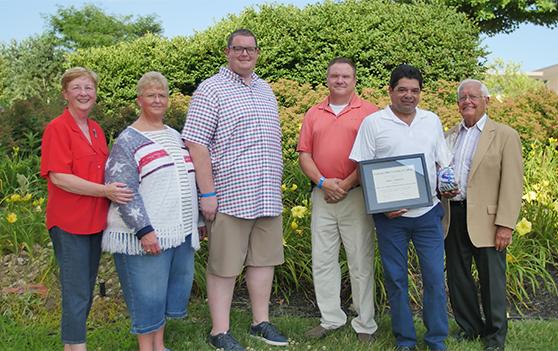 In 1981, 18-year-old Julio Valladares traveled to Newark, Ohio, with the El Salvador National Baseball Team to compete in the international Babe Ruth World Series. Now he calls Newark home and is doing his part to give back to the town that gave him a new beginning.

Today, Valladares has traded his amateur baseball career for one in accounting. He served as the treasurer of Gahanna-Jefferson Public Schools for 17 years. When an opening at Newark City Schools (NCS) became available in 2017, Valladares capitalized on the opportunity to return to the place where his life in this country began. He currently serves as the treasurer of NCS and secretary to the NCS Board of Education.

Accepting his current position marked the third time Valladares came to Newark. In his nomination letter, Robert McGaughy, COTC’s first business officer and retired Licking Memorial Hospital administrator, described how Valladares returned to Newark in 1982, one year after participating in the world series, to live with his host family. He worked many odd jobs until he was able to afford his own housing, and he was granted citizenship in 1985. Valladares enrolled at COTC in 1990, continuing to work in unskilled labor positions while pursuing his education.

Valladares graduated from COTC with an associate degree in accounting technology in 1994. This gave him the opportunity for better employment, which in turn provided the means to advance his education. Valladares received a bachelor’s degree in accounting in 1997 and then a Master of Business Administration in 2000, both from Franklin University. The job opportunities followed. ​

Valladares is a member of the Newark Rotary Club and the Licking Memorial Hospital Development Council. He also volunteers for Volunteer Income Tax Assistance (VITA), a local affiliate of the Licking County Housing Organization. He assists the elderly and others that do not have the knowledge or financial means to prepare and file income tax returns. This work touches many families in Licking County.

McGaughy wrote in his nomination letter, “I have been very impressed with Julio’s motivation, integrity and willingness to help others. He is someone who adds value to whatever group or organization he serves. His life has been a positive example of what can be done to overcome adversity and become successful.” 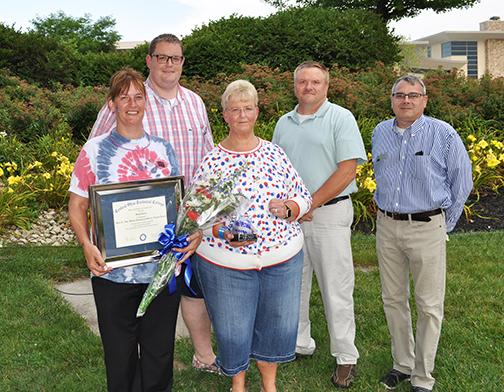 Terry is a 2016 graduate of COTC’s human services program and currently serves as an AmeriCorps college completion coach at COTC. She works with at-risk students and develops outreach activities in the communities where COTC is located.

Over her first year, Terry spearheaded many efforts to help the less fortunate in central Ohio. Twice she organized collections for women in domestic violence shelters, and she rallied fellow staff members to provide a holiday meal and gifts to a struggling COTC student. For Mother’s Day she coordinated with staff and students to plant flowers and hand-paint pots for women in domestic violence shelters. At the time of her nomination, she was helping a young person collect children’s books for a local 4-H project.​

“Her desire to improve the lives of individuals in central Ohio is inspiring, her energy is endless and her devotion to the college is contagious,” said Teri Holder, former COTC vice president of extended campuses and the Gateway. 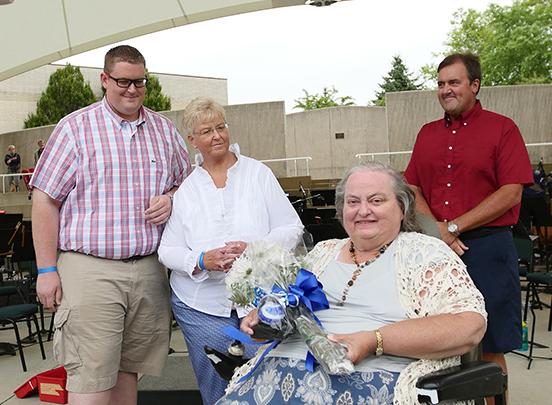 Sandra L. Miller of Newark, 69, graduated with a nursing degree from COTC in 1981. Miller worked at health centers and hospitals after graduation, but eventually realized that she wanted to use her skills to help people across the nation as a disaster relief volunteer with the American Red Cross. Miller served 19 years with the Red Cross and assisted in 38 disasters, including September 11th. She was also recognized nationally with the Clara Barton Honor Award for Meritorious Leadership. The award is one of the highest awards the American Red Cross bestows on volunteers. 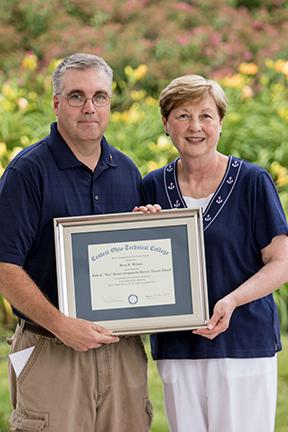 Bonnie L. Coe, Ph.D., President of COTC, presented Billman with the John C. “Jay” Barker Alumni Community Service Award during the 2015 July 3rd Concert and Fireworks at the Newark campus. “For all of his volunteerism and service, we want to recognize the tremendous impact Jerry has had in our community,” said Coe.

For over a decade, Billman has dedicated himself to improving his community. Billman is currently a member and President of COTC’s Alumni Council, a member of the Licking County Foundation Marketing & Public Relations Committee and a member and past President of the Rotary Club of Newark-Heath, where he is the Chairman of the Dictionary Project and Co-Chairman of the Rotary District 6690 Polio Plus Program. In the past, Billman also served as a member of the Society of Manufacturing Engineers, the Knox County Career Center Advisory Committee and a Licking County United Way Committee Volunteer.​ 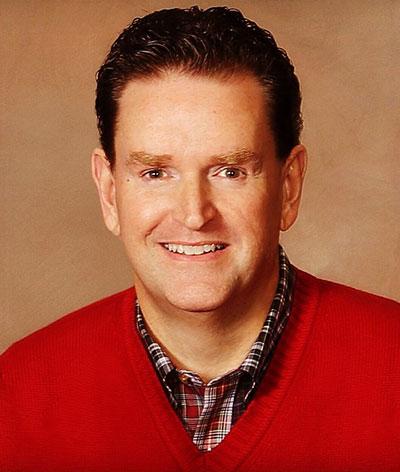