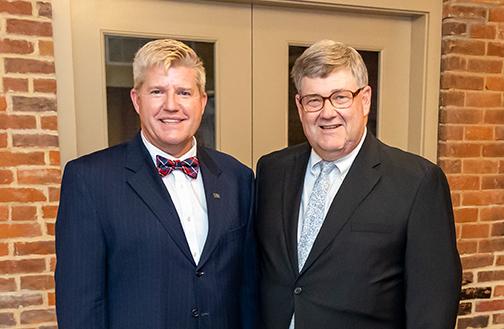 Central Ohio Technical College (COTC) recognized Mount Vernon resident Mark Ramser with the college’s Legends of Loyalty award during a recent Knox Campus Town Hall and presidential reception celebrating COTC’s 50th Anniversary. The Legends of Loyalty award, the highest honor bestowed by the college, was established in 2011 to recognize individuals who have impacted the college through their selfless service and unwavering support. Each recipient’s name is added to a perpetual plaque that hangs in the Office of the President, and a $1,000 scholarship is given to a COTC student in their honor.

In 2006, Ramser and several other Knox County community members purchased the former movie theater building at 236 South Main St. in the heart of downtown Mount Vernon for approximately $1 million. After donating the 33,000-square-foot building to COTC, he worked closely with college personnel for the next 2 ½ years to raise funds needed to renovate the facility. Because of his leadership and perseverance, the Knox Campus Capital Campaign concluded in December 2008 —amid an economic recession — with a remarkable $5.3 million pledged to renovate COTC’s new Knox campus.

In another generous act of philanthropy, in 2011, Ramser proposed a personal $50,000 match of all donations to the First-Knox National Bank Scholarship in honor of Gordy Yance as a way to both honor his good friend who was retiring as president of the bank and encourage others to show their support.  Because his personal match coincided with the Next Generation Challenge Scholarship Campaign — a $10 million gift-matching campaign to support the growth of endowed scholarships for students attending COTC and The Ohio State University at Newark — his match allowed donors to quadruple the impact of their gift. Ramser later increased his match to $60,000 due to the overwhelming community support that his match inspired. The First-Knox National Bank Scholarship benefits Knox County residents attending either COTC or Ohio State Newark. The scholarship endowment now has a market value of $188,000, and it has been awarded to 15 Knox County residents since its inception.

“Through his actions, he has demonstrated his belief in the importance of making quality higher education accessible to his fellow community members,” said COTC President John M. Berry, PhD, during the presentation ceremony. “His extraordinary leadership and contributions have advanced the mission and shaped the future of COTC, most especially in his hometown of Mount Vernon.”