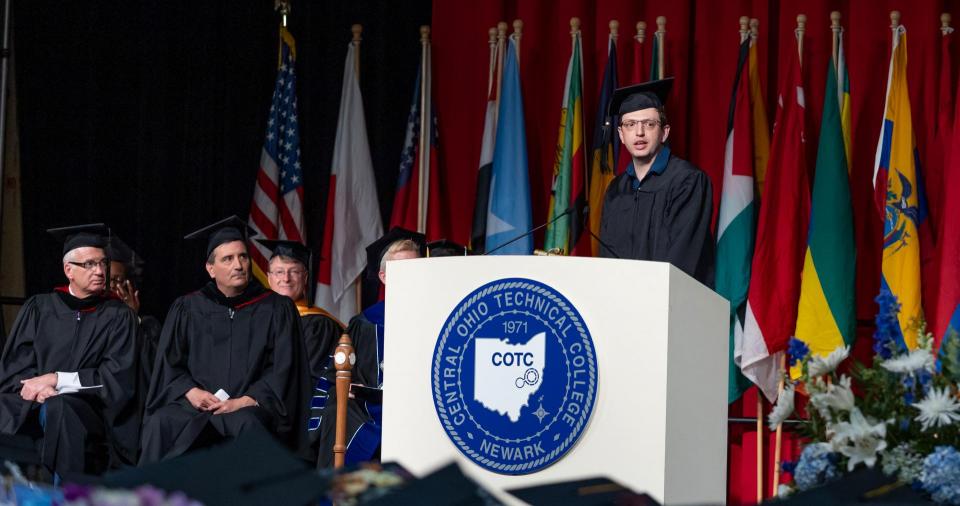 The first time Jonny Lippincott enrolled as a student at Central Ohio Technical College (COTC) in 2003, it was as a digital media design student. One could say he took the “scenic route” to finding his true passion — he eventually sought a degree in business after wanting to explore the hospitality industry — but his journey led him right back to COTC, and he’s thankful for the solid foundation the college provided as he graduates this semester.

“I just keep seeing the school getting better and better,” he said.

Ultimately digital media design didn’t end up being a fit for Lippincott, 37, who was selected as the college’s 2022 commencement speaker. He spent years pursuing other employment and even went to bartending school. Then, while bartending a few private parties, Lippincott, of Newark, became fascinated with the hospitality industry and felt a calling to study it further.

He knew COTC would be a smart starting point.

“I heard positive things about the business program, the convenience of the online courses they were offering for work-life balance, and the fact that both through word of mouth and just through reviews, I heard that the program was very good,” said Lippincott, who places a high priority on balancing his academics and job with his personal life. “So I thought, ‘Well, you know what? I’m going to give this a try.’”

The “try” was a success. Thanks to the support network he built along the way, Lippincott knew he would always be able to find a listening ear when he needed one. He can list a slew of administrators and professors who helped him along his journey to discovery. Among them was President John M. Berry, PhD, who Lippincott met back in 2003.

“He was always somebody who I knew I can trust and talk to about things,” Lippincott said.

Lippincott was able to apply for and receive several scholarships — including the Jane Cook McConnell Scholarship, A Call to College Scholarship and UFCW Scholarship — that helped ease the financial burden of attending school.

After graduating, Lippincott hopes to pursue a bachelor’s degree at Franklin University while building on his budding career in the hospitality industry, in which he intends to take on more leadership and management roles.

He’s excited about the career opportunities his future holds and is confident, at least, that he’s found a fit.

“I’m getting ready to move on to something that I feel is a little bit bigger and something where I feel like I’m going to be able to exercise my skills even more,” he said. “And I’m definitely looking forward to that.”