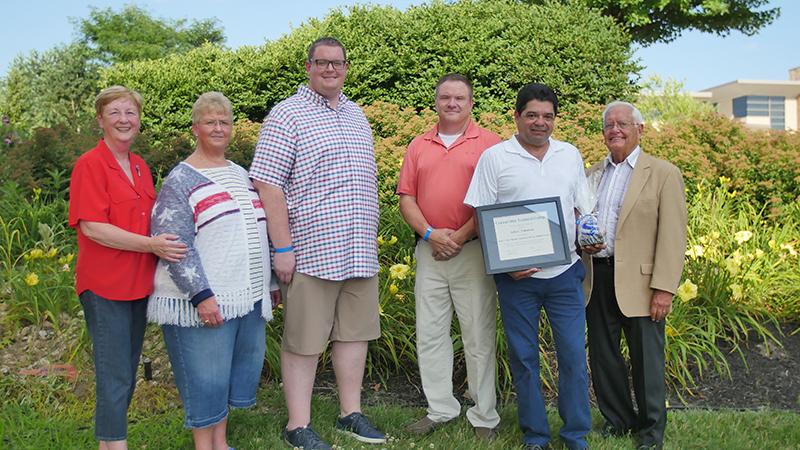 In 1981, 18-year-old Julio Valladares traveled to Newark, Ohio, with the El Salvador National Baseball Team to compete in the international Babe Ruth World Series. Now he calls Newark home and is doing his part to give back to the town that gave him a new beginning. On July 3, Central Ohio Technical College (COTC) recognized Valladares as the recipient of the John C. “Jay” Barker Community Service Alumni Award. ”It is an honor to be one of the alumni that have received this award,” said Valladares. “It feels great to give back to the community which opened the doors for me to become who I am today.”

Today, Valladares has traded his amateur baseball career for one in accounting. He served as the assistant treasurer and then as treasurer of Gahanna-Jefferson Public Schools for a total of 17 years. When an opening at Newark City Schools (NCS) became available in 2017, Valladares capitalized on the opportunity to return to the place where his life in this country began. He currently serves as the treasurer of NCS and secretary to the NCS Board of Education.

Accepting his current position marked the third time Valladares came to Newark. In his nomination letter, Robert McGaughy, COTC’s first business officer and retired Licking Memorial Hospital administrator, described how Valladares returned to Newark in 1982, one year after participating in the world series, to live with his host family. He worked many odd jobs until he was able to afford his own housing, and he was granted citizenship in 1985. Valladares enrolled at COTC in 1990, continuing to work in unskilled labor positions while pursuing his education.

Valladares graduated from COTC with an associate degree in accounting technology in 1994. This gave him the opportunity for better employment, which in turn provided the means to advance his education. Valladares received a bachelor’s degree in accounting in 1997 and then a Master of Business Administration in 2000, both from Franklin University. The job opportunities followed.

“COTC played a huge role in my career by opening the doors to continued education,” said Valladares. “It feels great to be back in Newark because it is giving me the chance to apply my work experience in school finance to a great community like Newark and at the same time feel like part of the success of a great school system.”

Valladares is a member of the Newark Rotary Club and the Licking Memorial Hospital Development Council. He also volunteers for Volunteer Income Tax Assistance (VITA), a local affiliate of the Licking County Housing Organization. He assists the elderly and others that do not have the knowledge or financial means to prepare and file income tax returns. This work touches many families in Licking County.

McGaughy wrote in his nomination letter, “I have been very impressed with Julio’s motivation, integrity and willingness to help others. He is someone who adds value to whatever group or organization he serves. His life has been a positive example of what can be done to overcome adversity and become successful.”