Mike Johnson had a motto: Always do the right thing because it’s the right thing to do. Perhaps that is why all of his children pursued careers protecting and caring for others. And they all began at COTC.

“That (motto) transferred over to the career field I’m in. You have to maintain high integrity,” said Kyle Johnson, the eldest, who was named chief of the Fredericktown Police Department in October 2019. He completed his peace officer training at COTC in 2009, which set him on the path to the pinnacle of law enforcement near his hometown after spending a decade in the banking industry.

“It was a drastic change for me, but from day one at the academy I loved every minute of it,” Kyle said about starting a new career in his 30s. “In policing there’s a very high expectation, and that stage was set very early on in the academy at COTC. The instructors expected it and demanded excellence, integrity and professionalism.” 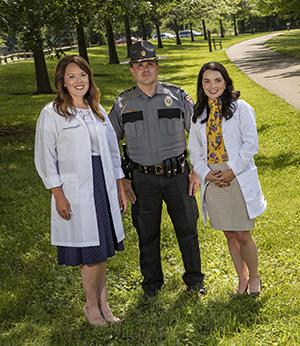 His sisters, Jackie Neighbarger and Sarah Vaida, completed the nursing program at COTC and each went on to earn a master’s degree and work as a nurse practitioner. Neighbarger is employed at the Knox County Health Department while Vaida currently resides in New Hampshire.

Mike’s legacy continues today at COTC with the Mike Johnson McDonald’s Scholarship. “He would help anybody. He would always give back, teach others,” said Brian Mortellaro, who established the scholarship in Mike’s memory after his unexpected death in 2015. “Education is the most important thing in the community to get everyone to a higher level. The more and easier access to education, the better the community.”

Mike was employed for more than 20 years as a physical plant supervisor at Mortellaro’s McDonald’s, but the two were also close friends. The scholarship is very personal and purposely designed as well. It starts with COTC, where Mike’s children graduated. It is awarded to students in skilled trades or mechanical engineering technology (“to create the next Mike Johnson”), nursing technology or law enforcement technology (his children’s majors). Students must also reside in one of the counties where Mike worked in Mortellaro’s restaurants: Guernsey, Holmes, Knox, Licking, Morrow and Muskingum.

“My dad was a very caring individual,” recalled Kyle, adding that when his dad owned his own appliance repair business, “He always put others before himself. He would do work and not expect payment because he felt bad for their financial situation.” Now Mike is helping a new population. Those that knew him best believe Mike would agree that giving students a financial boost is the right thing to do.

Back
This item appears in: