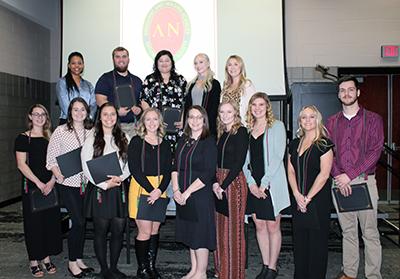 Fourteen Central Ohio Technical College (COTC) students took the oath of membership on February 6 to be inducted into the Ohio Delta Chapter of Lambda Nu, the national radiologic and imaging sciences honor society.

Berry praised the inductees for such a momentous accomplishment being the first inductees in the recently certified chapter of Lambda Nu. He quoted author Johnathan Harnisch saying, “The strongest people are not those who show strength in front of the world but those who fight and win battles that others do not know anything about.” He went on to encourage them to also acknowledge the roles their supporters played in their achievement.

Khol echoed President Berry’s sentiment by sharing a quote from Issac Newton that provided two key pieces of advice for the inductees, “If I have seen further than others, it is by standing on the shoulders of giants.” He told inductees that Newton had written it as a thank you to Robert Hooke whose scientific work enabled Newton to accomplish his own. Khol urged the inductees to also acknowledge those who helped them accomplish their goals. His second piece of advice was more of a challenge to the inductees. He advised them to recognize that they are now the “giants” and it is their duty to help those who come after them to “see further.”

Andrea Powell, radiologic science technology student and Ohio Delta Chapter president, said, “I’m so proud to be the founding president of our chapter of Lambda Nu. It was a little intimidating to be a part of something that hasn’t been done before, but seeing how excited my classmates were made it a lot easier. It feels amazing to know we’re leaving a legacy for future COTC radiologic science technology students.”

To become a member of COTC’s chapter of Lambda Nu, a student must have a 3.3 grade point average or higher on a 4.0 scale after one full-time semester (or equivalent) of a radiologic or imaging sciences program and must provide evidence of commitment to the profession. The national honor society works to foster academic scholarship at the highest academic level, promote research and investigation in the radiologic and imaging sciences, and recognize exemplary scholarship.

The Ohio Delta Chapter received certification on October 8, 2019. Those who took the oath of membership at the ceremony: