Central Ohio Technical College (COTC) presented three alumni awards in a virtual holiday reception on December 8. This year’s alumni award recipients have one thing in common: a knack for helping the next generation.

This award recognizes COTC alumni who have personal and/or professional achievement that brings honor and distinction to the college and individual attainment and/or contributions for the betterment of our community. 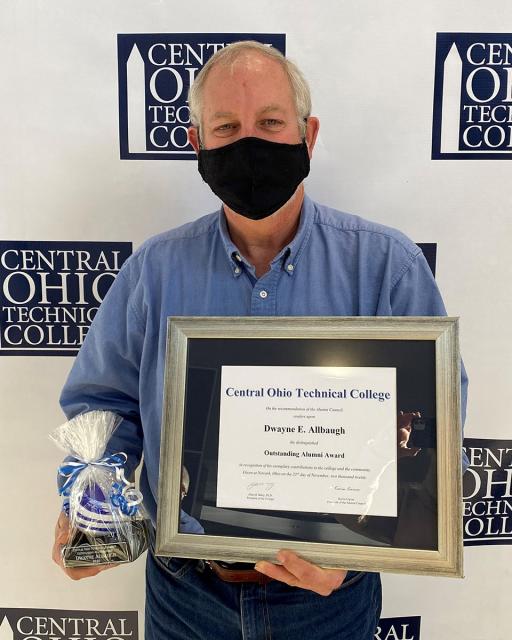 Dwayne Allbaugh, of Nashport, is COTC’s Outstanding Alumni Award recipient for 2020. Allbaugh graduated from COTC in 1982 with an associate degree in electrical engineering technology. Now in his second stint at The Boeing Company, he is a senior engineer and one of the most sought after subject matter experts in the Boeing Guidance Repair Center.

“Dwayne’s technical career, education and degrees alone are not the essence that makes him special, but rather his ability to lead, inspire and mentor the less experienced engineers across our teams,” wrote his colleagues John Urban, Chris Rouillard and Julie Dowdell in their nomination letter. “Dwayne can often be found reaching out to younger engineers and providing them with advice and mentorship that will undoubtedly serve them well throughout their careers. Dwayne is the ultimate team player who derives satisfaction when people around him succeed.”

Allbaugh’s career began at the Newark Air Force Base and has included stops at Good Samaritan Medical Center, the state of Ohio and CeyCal Inc. From product review and test equipment engineer to computer specialist and network system consulting, he has held many roles in both engineering and information technology. Allbaugh continued his education at Franklin University, earning a BS in Computer Science in 2006.

“I’m honored and privileged to receive this award,” said Allbaugh. “My education at COTC was a good foundation to launch into my bachelor’s degree and helped me be successful in my career over 40 years.”

This award recognizes COTC alumni currently working at the college in either a faculty or staff capacity who help advance the college and make a difference in the lives of current students. 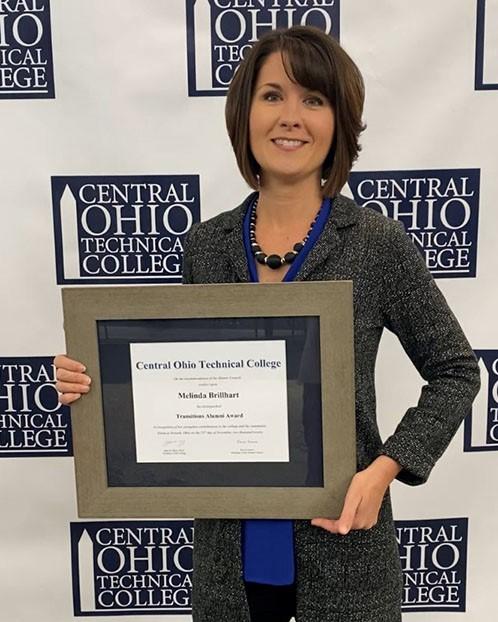 This year’s recipient is Melinda Brillhart, EdD, RDMS, RVT, RDCS, of Johnstown. Brillhart graduated from COTC in 1999 with an AAS in Diagnostic Medical Sonography Technology (DMS). She went on to work as a sonographer at several medical facilities before returning to COTC as an instructor in 2009. She also completed a BBA and MS in Management from Mount Vernon Nazarene University. In 2016 she earned an EdD in Educational Leadership and Management from Capella University.

Brillhart taught part-time at COTC for four semesters before becoming an associate professor and program director of the DMS program in 2011. She received the Excellence in Teaching Award from Phi Theta Kappa honor society in 2011, the John & Suanne Roueche Excellence Award from The League for Innovation in the Community College in 2013, the COTC Teaching Excellence Award for the 2014-15 academic year and the Above and Beyond Faculty Award in 2020.

“After 20 years in the sonography community, I am so thankful that I have the opportunity to give back to my students,” said Brillhart. “Getting an education here changes the trajectory of your life. It really does set you on a path where you not only get a job, but you have a profession. I take pride in my students, and I love being a teacher at COTC. It really has come full circle for me.”

Brillhart was nominated by COTC Dean for Technical Studies Sandra Walker, EJD, who wrote, “She has enhanced the curriculum of the sonography program, including establishing articulation agreements that provide a pathway for students to pursue their bachelor’s degree. Under her leadership, graduates of the program consistently demonstrate a high level of success in credentials achievement.”

This award recognizes COTC alumni who have made a significant impact on their local community through their leadership, involvement and service. It was created in memory of John C. “Jay” Barker (Business Management Technology, 1986) whose incredible dedication to the college and the community epitomize the qualities and characteristics this award seeks to recognize. 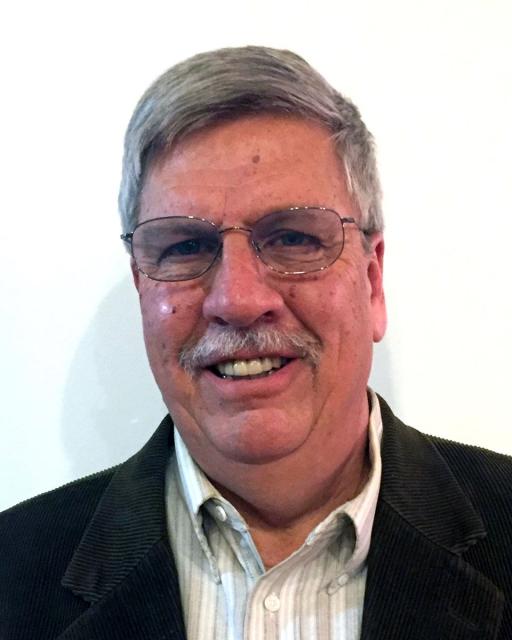 Gary Schworm, of Howard, is this year’s recipient. “I started at COTC when I was 32 years old. It took me 23 years to finish my manufacturing engineering associate degree, which was a springboard for me to go on and get my bachelor’s degree. You’re never too old to learn,” he said. “At COTC I was able to acquire skills in a lot of different areas…Those newly acquired skills opened a lot of doors for me both in my employment and volunteerism.”

Schworm is retired from the Owens-Corning Technical Center. While working there, he received an AAS in Manufacturing Engineering Technology in 2006 and added a BBA in Management in 2010 from Mount Vernon Nazarene University. Hub Reed submitted the nomination in which he detailed Schworm’s community service that includes volunteering with Habitat for Humanity in Michigan, California and Kentucky as well as Ocho Rios, Jamaica; assisting flood victims in Findlay, Ohio, and Midland, Michigan; becoming a certified pole vault coach and restoring track hurdles for his local school district; and making repairs to the plumbing system in his granddaughters’ school athletic facility.

Reed added, “In addition to all the above, he still finds time to help neighbors like myself who are not very competent in the areas of computers, plumbing, electrical and carpentry.”

Most notable, however, is Schworm’s performance as chair for an operating levy campaign and a bond issue campaign for East Knox Local Schools. Stephen Larcomb, superintendent of East Knox Local Schools, wrote that the district had financial difficulties from 2008-2016, including nine failed operating levies. He asked Schworm to chair the levy campaign committee in 2016; the levy passed on the first attempt under Schworm’s leadership. Three years later, a school bond issue for building construction and renovation was needed by the district. Larcomb once again turned to Schworm.

“Many community members opined that it would never pass. Gary, leading by example as he always does, worked throughout good and fairly ugly weather to pass out campaign materials and talk about the great things happening in our district,” said Larcomb. “The result was bond levy passage on the first attempt by 53-47%, which is a virtual landslide for our school district. Gary is now 2-0 as levy chair.”