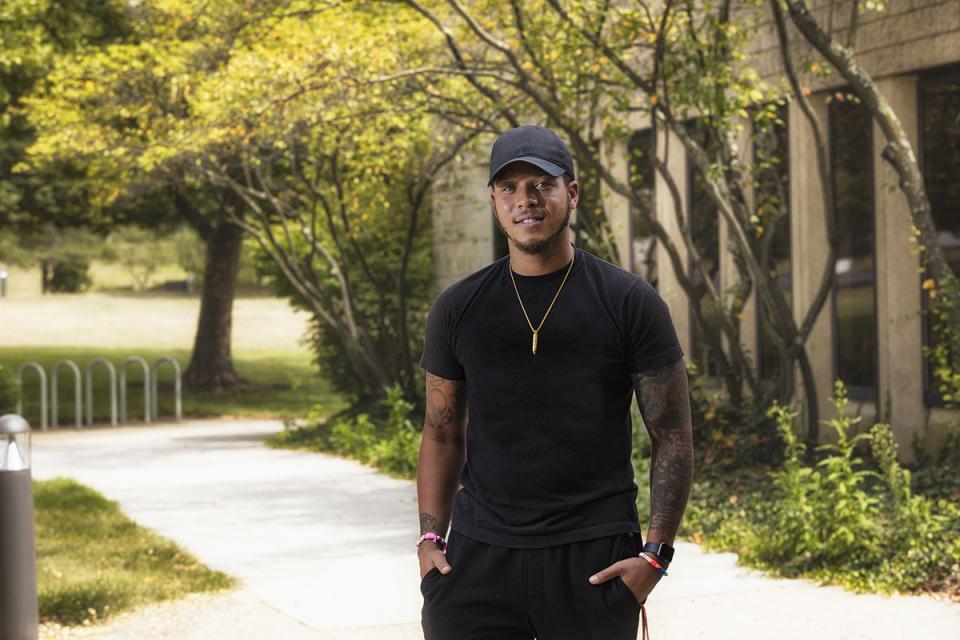 Just a few years ago, information technology (IT) student Kennard Haynie Jr., known as KJ, would lay his head down at night in his Baltimore, Maryland, home thinking that higher education would always be just a dream for him. After leaving family, friends and an unhealthy lifestyle in Maryland, Haynie moved back to Ohio for a fresh start. While riding as a passenger in his friend’s car he noticed Central Ohio Technical College’s (COTC) Pataskala campus, and Haynie realized that his dream could become a reality that would lead to the life he wants.

“What motivated me to pursue an education was the environment I was living in when I lived in Maryland. When I had my son Sawyer and I was separated from him when he was six months old, I knew I would have to get back to school to do better to have him back in my life,” said Haynie.

His journey has been one of those maze-like dreams that require one to find and open the right doors despite obstacles of many kinds. When he first began his education, Haynie didn’t have a license or car, and he slept on his best friend’s couch. He usually rode his skateboard to COTC’s Pataskala campus and had to juggle classes, homework and two jobs. Haynie has worked as a trainer and back-up lead for Abercrombie & Fitch Co. and as a stocker at Dollar General finding time before and after work and during breaks to do assignments.

“He came to class with a strong desire to learn. He displayed the intellectual virtues of humility, courage and tenacity,” said Steven Huizenga, PhD, professor of philosophy. “I saw him grow as a student and saw the potential he possesses. There are no limits to what KJ can do.”

Haynie shared that thankfully much of his coursework has been online enabling him to continue pursual of his degree despite obstacles. Not only has online coursework helped but instructors like Huizenga and Kimberly Goudy, professor of business management, have made a difference in his life.

“There have been two teachers that I can think of that have made a significant impact on me. Dr. Huizenga was the first teacher who offered a study group to help with the material which then lead us to talk to other students about coursework. Kimberly Goudy is the second. I had lost my ex-girlfriend/roommate/friend in a car accident on July 17 and Professor Goudy helped me adjust to living on my own after she had gotten an email from me about being unable to finish an assignment,” said Haynie.

Goudy remarked that Haynie was an outstanding student who always showed the utmost respect and kindness and turned in assignments ahead of schedule, so when he missed a week of assignments, she knew something had to be going on. With dogged determination to speak to him on the phone, Goudy finally convinced Haynie to call her.

“We spoke on the phone late on a Friday, and I was able to share with him that I cared about his mental health and wanted to make sure he had his basic needs met while he figured out how to get through his loss and continue to work and do coursework,” said Goudy. “I wanted to remind him that he is more than just a student at COTC, that we are willing to help by offering support and sharing college and community resources. Of course, KJ finished strong in the class.”

Haynie is on track to graduate with his Associate of Applied Business in Information Technology in 2021. He plans to then pursue his bachelor’s degree at The Ohio State University.

“The most important thing that I have learned at COTC is that doing the work will pay off,” he said.