Steven Carles started his adult life much like his childhood — bouncing from one place to another without certainty for what came next.

The trials of his adolescence, university and military experience reconciled when he enrolled in the law enforcement technology (LET) program at Central Ohio Technical College (COTC). Today he’s working his dream job and becoming the person he wished he had known in his youth. 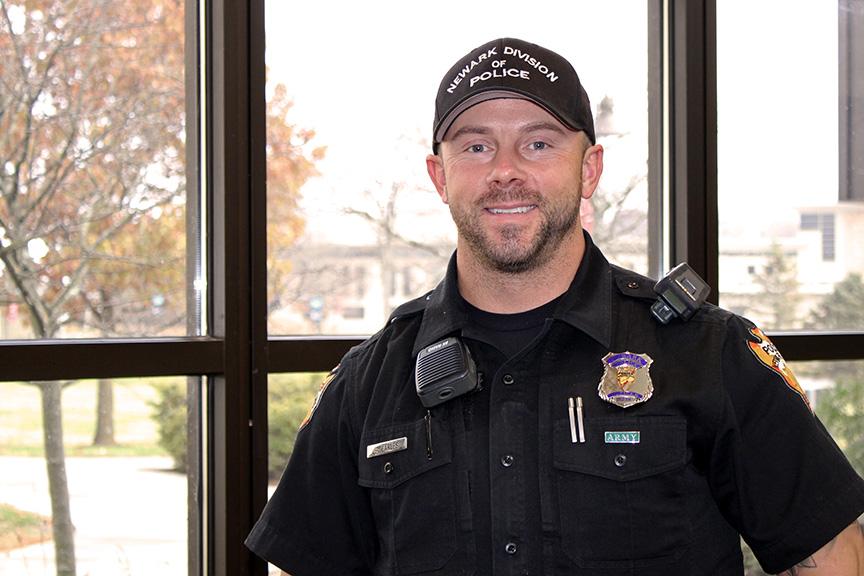 Carles is a citizens initiative officer at the Newark Division of Police. His job involves responding to citizen complaints, assisting with the Citizen Police Academy program, teaching ALICE and active shooter training to local schools, and working the Newark Addiction Recovery Initiative (NARI). It’s that last duty that hits close to home for the young officer.

“I’ve overcome a lot,” Carles said matter-of-factly. A child of addicts, he lost his parents to drug overdoses, lived in foster homes for most of his childhood and cut ties with five of his six siblings who followed in their parents’ footsteps. “I’ve experienced addiction — not as a user, but I’ve lived that life. I would love to get drug users the help they need because unfortunately it’s too late for my parents. There are so many resources for them; they just need the guidance.”

Carles graduated from Heath High School in 2007. He went to two universities and then to COTC before enlisting in the U.S. Army in 2011. He spent four years on active duty at Fort Bragg in North Carolina. He also became a husband and father during that time and decided it was time to come home to Ohio. He remains active in the Army Reserve today.

“Law enforcement was on my mind more because of the very similar paths [between the military and law enforcement]. I looked right into the police academy and LET program,” he said about his return to civilian life and higher education. Carles jumped back in where he left off, retaining the credits he had earned before. “I had been out of school for four to five years, so the first couple semesters were tough. Once we got into the law enforcement classes that were geared toward the job, I was more interested in it. I was more excited to go to school. The professors were all great.”

Carles completed the police academy in 2016 and earned an associate degree in LET in 2017. Getting a job as a police officer is a long, difficult process. Getting a job close to home is even harder. Carles spent one-and-a-half years in the Zanesville Police Department before an opening became available in Newark. It’s been two years since he accepted the position.

“It’s fun. It’s new. It’s different every day,” he said, adding that being five minutes from home is part of the reason he’s landed his dream job. “I enjoy it, and I couldn’t see myself doing anything else.”

Well, maybe one thing. Carles is an avid CrossFitter and enjoys fitness. To fuel his entrepreneurial spirit and curiosity about opening his own gym, Carles completed an associate degree in business management technology at COTC in 2019. But, he has no immediate plan to pursue that idea. For now, he’s content with his career trajectory and, in contrast to his fickle formative years, is firmly committed to law enforcement and the military through retirement.

COTC’s law enforcement technology program allows students to receive both an associate degree and complete the Ohio Peace Officer Training Commission requirements. It is a 15-month program. Find out more about the program at go.cotc.edu/LET.